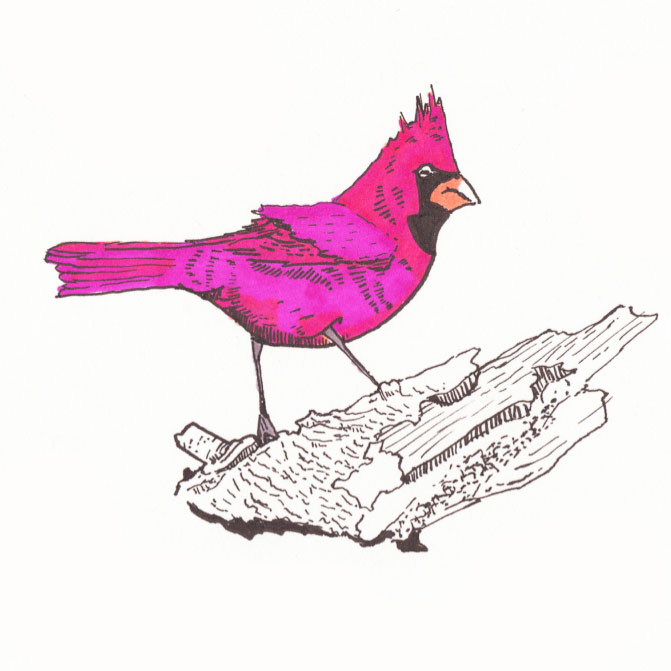 We see red cardinals mostly in the winter when they’re the only thing that’s not white on the back porch bird feeder. They are bright, blood on white, red lipstick for the first time on a fair face like Emma Stone. Female cardinals have a duller brown color, with tails and wings that lack the same. I tell dad that that’s sexist.

Cardinals stay in the same area year round and don’t migrate. Dad had a smaller tin-sort of bird feeder, until he made a bigger one out of wood. I snickered at the time and asked Mom why. “He knows a lot about them. He has a whole book. He loves birds, but he won’t say it.”

In 1996, my mother’s father passed away from prostate cancer. Two million men in the US are able to call themselves survivors of this disease every year. A whole lot of them and my mother’s father wasn’t one of them. For a while I thought this cancer happened to everyone—as did brain cancer. In health class, Mr. Jacobsen would give us homework to ask our parents what diseases run in the family. Alcoholism, she’d say. I didn’t get that.

“But what about Pop Pop’s cancer? Can we get that?”

Pop Pop died in April—a month after I was born. Mom tells me every time how that day went when I ask her to retell it. “He was very weak, but he made the trip to the hospital to hold you. Just like he did for Erin and Kelly.” I’m really good with memory, but I can’t remember my first birthday with Pop Pop. I lie to myself and say that I do instead.

He didn’t want to die in a hospital, so for the last month he was living at home with a few nurses on hospice. Mom also tells me that I was the only one in the room—along with my mom and her sisters—when he died. I never cried as a child, so being next to my grandfather when he stopped breathing was okay. I didn’t harm the silence, and no one had to take me outside like parents do during mass. In my mom’s eyes it was okay, I know that.

Red cardinals typically live fifteen years in the wild. They are monogamous and feed their partners as they incubate clutches of eggs. Sometimes they even go with other birds in flocks. I’ve thought that cardinals were the happiest birds just because they are red. They don’t have to be as happy just because they’re pretty. Mom was depressed when I was born, and every few times we watch home videos as a family, I watch it on her face. She cringes at her shoulder pads and wonders why she thought that was attractive then. She said they all thought it made them look skinny, she and her sisters. I go and buy an old sweater with shoulder pads. Maybe that’s why I was like a satin blanket for her, her sisters, my dad, her mom. He went and I came, mom says.

My dad’s mom, Nanny Moe, died in 2011. I was older, and Dad couldn’t rock me in his arms like Mom was able to. Instead, I held him this time, even though I don’t like to. We went to church every Sunday, and when the priest would ask us to pray in silence, Mom and Dad did for a longer time. Before Nan died, Mom must have been praying to Pop Pop, praying to my cousin, praying that her daughters weren’t as sad as she thought. But then it was only about Nan. Dad kept his head down until it was time for the Eucharistic prayer and we had to squeeze each other’s hands for love. Every Sunday, when they rose their heads from praying, I was the only one who wasn’t crying. I looked out to the pews and pretended I didn’t know about how their faces looked. Mom would stare at me out of the corner of her eyes because I think she thought I should cry, too. I didn’t. I thought I could help my dad in the slightest way.

When a deer would stand in the bushes on the side of the road, Mom would quietly gasp and slow down the car. What if there was someone behind us? It wouldn’t matter. She would say that she had been praying for a sign that Pop Pop was here, and then the deer came. I am amazed for her.

When Red cardinals came in the winter, dad would drink his cup of coffee and stare at them through our kitchen window. He didn’t say anything, but I told him how pretty they were. Soon enough, every present was a red cardinal because we believed this was Nan reincarnated, too. We found cards with red cardinals, ornaments, pillows, and pottery placements. Every time we saw a red cardinal, it was a sign of Nan. So, Dad kept on making more bird feeders. Each one bigger and better than the previous.

He told me red cardinals were the happiest ones.