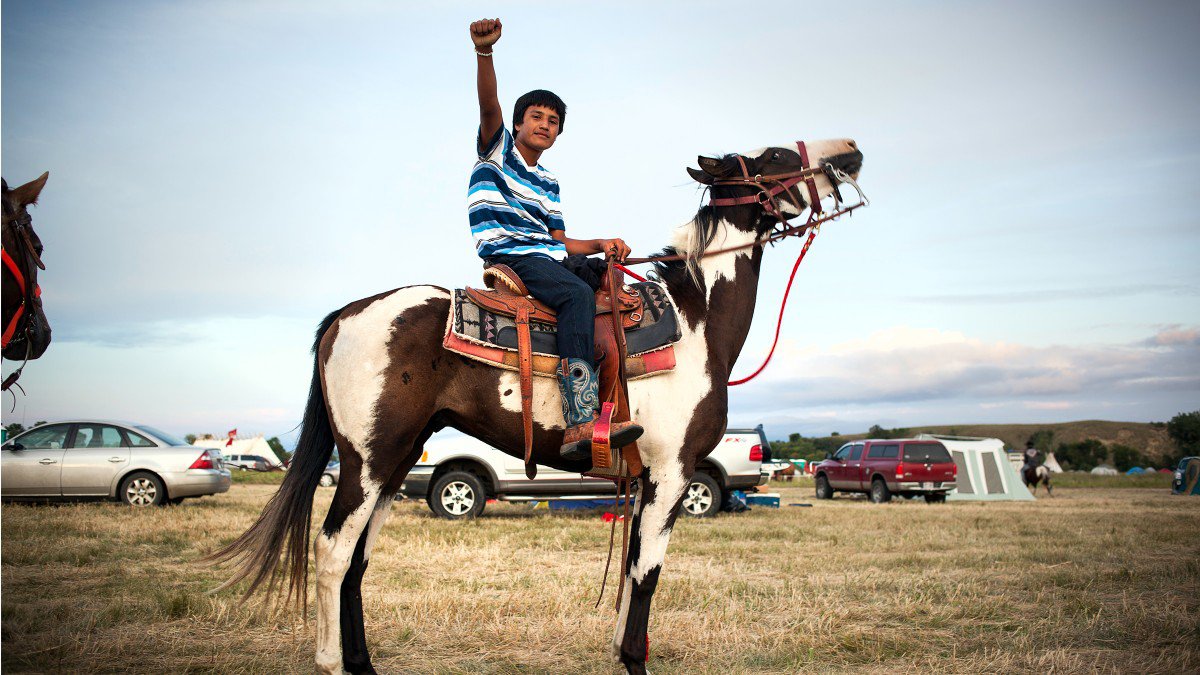 Energy Transfer Partners LP has gotten approval from all four states to start construction on a 1,172 mile underground oil pipeline. The EPA suspects pumping about 570,000 barrels of crude oil a day through the ground could lead to some environmental problems and asks the U.S. Army Corps of Engineers to check it out.

Two hundred Native Americans ride in to protest construction (literally ride in on horses). Energy Transfer plans to build the pipeline through sacred land belonging to the Standing Rock Sioux Tribe, and the tribe obviously has a problem with that since, you know, it’s their fucking sacred land. They are also worried about having their water poisoned and ask the U.S. Army Corps of Engineers to do a better fucking job with their environmental study.

The U.S. Army Corps of Engineers decide to let Energy Transfer build the pipeline, anyway. Fuck the tribes that were in this country before us, am I right? The Standing Rock Sioux Tribe sues them to stop construction.

Protestors in Iowa set construction equipment on fire. The tribe tries to convince a federal judge they have the right to not have their drinking water and sacred lands potentially poisoned by oil. The media finds out the pipeline was originally supposed to cross the Missouri River near Bismarck. Energy Transfer rerouted it through Standing Rock because it was shorter, and they didn’t want to risk poisoning Bismarck’s drinking water. Fuck Standing Rock’s water, too!

Protesters start being attacked with guard dogs and mace. The U.S. Justice Department, Interior Department, and Army tell the U.S. Army Corp of Engineers to chill with construction until they do some more environmental assessments.

A federal judge tells Native Americans to fuck off and to let the pipeline get built. Police start arresting protestors (surprise, surprise) including Shailene Woodley (a little more surprising). The protestors, a little frustrated at this point, set some shit on fire. Police get out their riot gear and shoot protestors with pepper spray and bean bag rounds.

Energy Transfer has pipeline built up to the border of Lake Oahe, the body of water owned by and sacred to the Standing Rock Sioux. The Department of the Interior and the U.S. Army Corp of Engineers decide not to give Energy Transfer permits they need to go under the lake, until they talk to the Native Americans. What an idea! Supporters all over the USA and Canada (including Bernie Sanders, of course) protest the pipeline.

Energy Transfer refuses to reroute the pipeline. Police shoot protestors with water cannons and rubber bullets. The U.S. Army Corp of Engineers tells protestors to GTFO by December 5th. Protestors tell them to fuck off.

Two thousand veterans head to Standing Rock to help out the protestors. The U.S. Army Corp of Engineers finally officially refuses to let Energy Transfer put the pipeline under Lake Oahe. It’s possible someone over there finally watched any horror movie from the 1980’s and realized no good can come from construction projects on sacred Native American land.

Energy Transfer releases a statement saying they “are fully committed to ensuring that this vital project is brought to completion and fully expect to complete construction of the pipeline without any additional rerouting in and around Lake Oahe. Nothing this administration has done today changes that in any way.” In other words: “Fuck you guys, we’ll just wait for Trump to take office.”

Don’t take your eyes off of Standing Rock. This shit isn’t over.