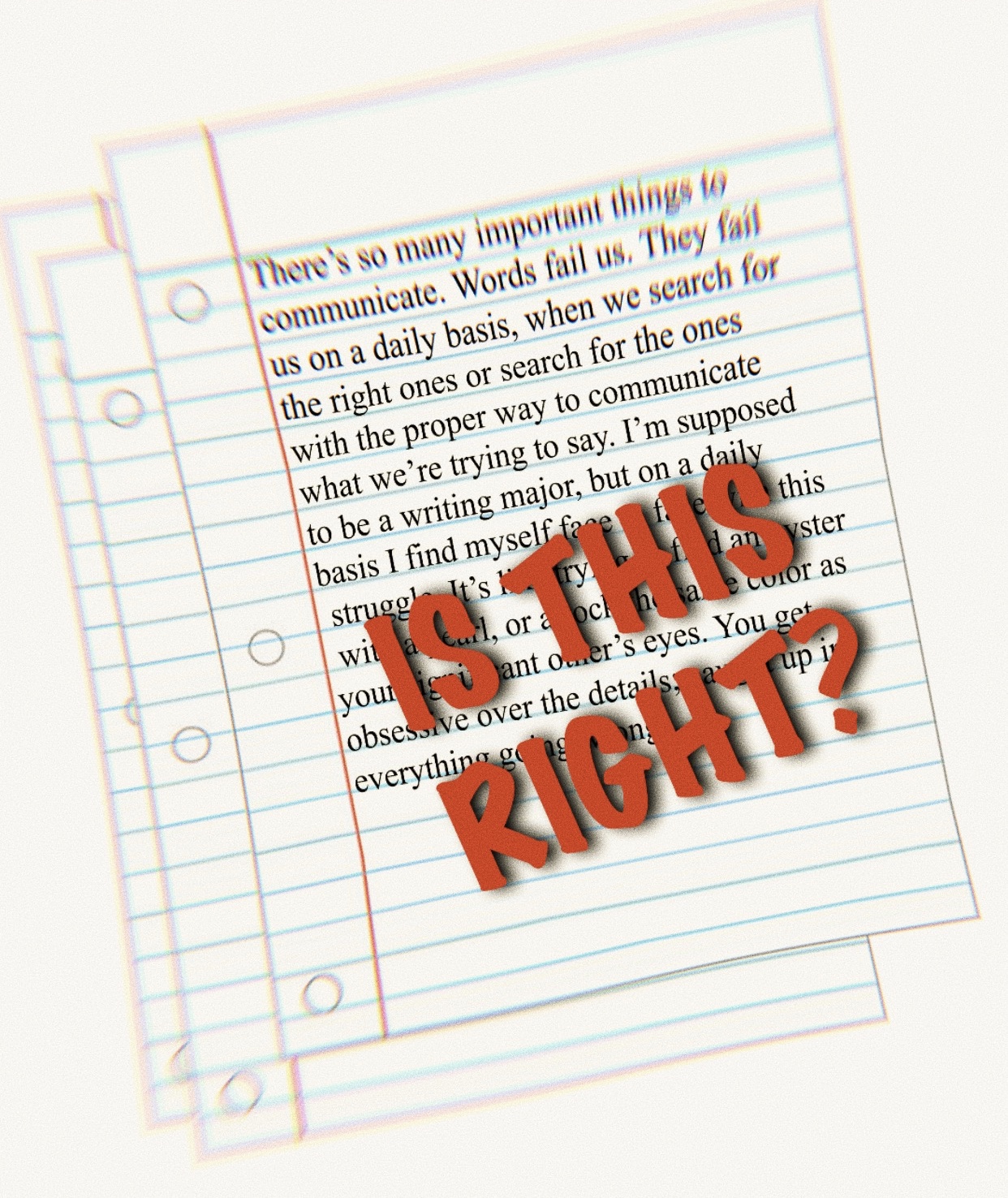 There’s so many important things to communicate. Words fail us. They fail us on a daily basis, when we search for the right ones or search for the ones with the proper way to communicate what we’re trying to say. I’m supposed to be a writing major, but on a daily basis I find myself face to face with this struggle. It’s like trying to find an oyster with a pearl, or a rock the same color as your significant other’s eyes. You get obsessive over the details; caught up in everything going wrong, from syntax to grammar to diction to the emotion behind the piece.

Every day I struggle to communicate in the proper language, I try so hard to observe the world around me and communicate my state of being, but I feel like a constant failure, a one year old child trying to walk but falling on my ass over and over again. There’s so much beauty to this world, and I long for the ability to communicate it all—to pin it down with language that pierces the outer mask of this world and strikes hearts, that gets people to think and feel, but my image and creative well seems dry. I don’t know how to say what I’m saying. I don’t know how to communicate my thoughts eloquently, when my whole career and being is centered upon the eloquence and beauty of language. I feel like a car in a ditch. My wheels are turning and turning, but I don’t seem to be getting anywhere, and it pierces me, a constant thorn in my brain that won’t relent or lessen its pain. There’s so many thoughts, emotions, and observations in my head, but they won’t come through the surface in the way that I want them to. I keep trying to pull them out into a stream of language, but the words are like sand sifting through the cracks in my cupped hands.

I this fear that I’m too happy. Maybe that’s why there’s no energy behind my writing anymore. I don’t know. There’s too much good and I don’t know how to handle it. Nothing is going wrong. I’m away from my parents; I have friends and experiences; I’m doing well in my classes; I have nothing to whine or be concerned about, and a lot of me hates that. It felt like desperation and suffering somehow made me more of a person; someone with important things to communicate and say, but that’s non-existent and gone now. All there is is good and relaxing things, and somehow a deep part of my psyche is more desperate than ever.

The emotions are gone; they’ve left me on energetic wings with nothing to think and feel that seems important. How do I feel profundity when I’m so goddamn happy all the time? How can I find importance in joy, when it’s all there is? I’m not used to it; I don’t understand it; I don’t get how people write anything worth saying without something darker fueling them. Is that all that made me special? Is my brain worth ending without that? How can someone with nothing wrong feel so bad?

Everything is a cliche. Nothing is worth saying. All my images are old and unvivid; you can’t pick them up and throw them across the room with the same fire as you once could. They’re coals — black and dusty and cold to the touch. I want that fire to return, but it’s as if there’s nothing left for me to say. Nothing at all. Nothing important, nothing profound, nothing that doesn’t sound like the spewing vomit of a thirteen year old trying to be deep. My writing feels dead. Maybe this isn’t the right path for me. Committing to a life of despair for the sole purpose of having creative fuel is a long and desperate path that never seems to end well.

Then again, I’m still young. Making any sort of grand life decision is fruitless. There is time yet for a hundred visions and revisions; I don’t have to confine myself to any sort of life path yet. I can just float through for now, enjoy the warm bubbling tingles of happiness and contentment and pleasure, enjoy for once not having to think and overthink everything happening in my life, although I’ll do that frequently and often—no matter how much I try to restrain myself.

Eventually, that something will happen to strike that writing bone again, and the words will flow as freely as a bloody nose. For now, maybe that won’t happen for a while. I just need to give my words time to refill themselves, give my creative energy time to brew and resurface. And when it comes back, I will write with fire.