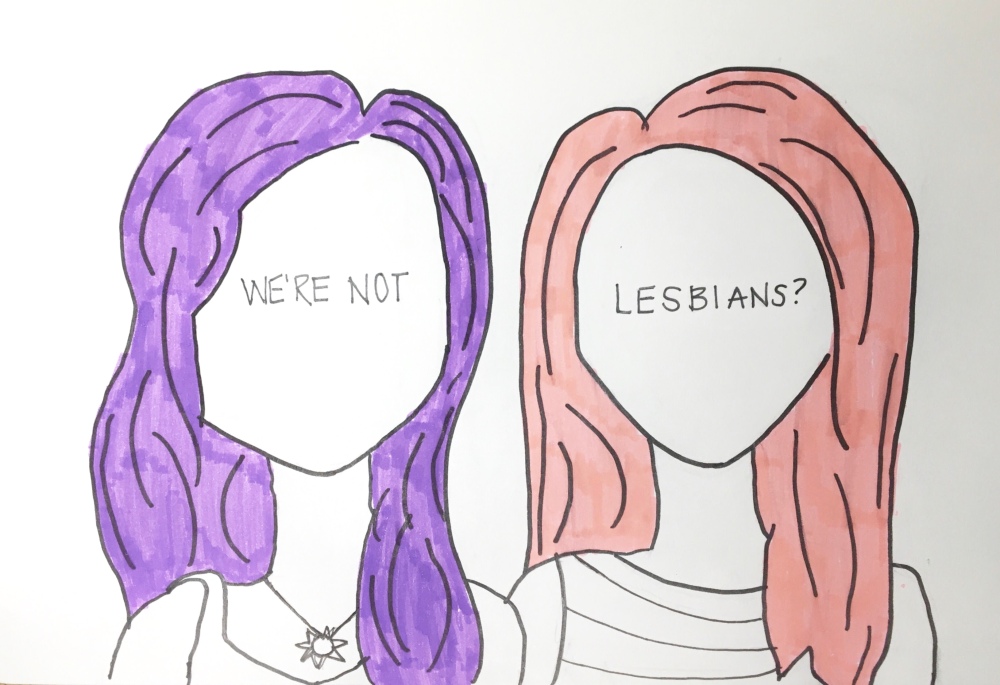 Everyone loves their best friend, but some people think my best friend and I have taken our love to a non-platonic level. For the past three and a half years that we have known each other, we have been asked how long we’ve been in a relationship, if we’re a couple, and shown apparent shock when told, “no, we’re not dating.”

The kicker, we are attracted to men and for two of those three and a half years, I had a steady boyfriend.

So why is it that people assume two close-knit women are dating? What was once almost an exclusively heteronormative culture, has become very progressive, especially where we live in Burlington, Vermont, which leads me to question, are people becoming so progressive they now assume two females who spend a lot of time together must be involved in a romantic relationship? The obvious answer weighs heavily on stereotyping and even assuming gender.

My best friend, Katie, and I appear separately as strong, independent women. But together, that strong independence turns into two women who appear too strong for men and therefore, must be lesbians. Our resting bitch faces and the aura we exude is intimidating to many females, and most males, making us unapproachable at times. This is not a speculation; we have both been told before.

Katie stands at 5’10”, which is a similar size to many men, creating the illusion of a sized based power struggle. I, on the other hand, have been told my 5’3” figure is scary because I call people on their bullshit and cause earthquakes with my eye rolls. This can repel men, as Iliza Shlesinger jokes in her 2018, comedy special, Elder Millennial, “Men don’t like a lippy woman, so zip it honey.” Place Katie and me in the same room, combine our characteristics, and we suddenly become man-haters.

By taking part in outdated and offensive stereotypes including shorter haircuts, wearing clothing originally assigned for men, striving for successful careers, believing in equal treatment of men and women, and *gasp* wearing flannels from time to time, we must be gay. Thank goodness, neither of us drives a Subaru.

Burlington is the largest city in Vermont and an extremely progressive area. This may lend a hand to the speculations Katie and I receive, but it requires assumptions of our sexuality as well as how we identify by gender. Church Street is a very populated, pedestrian-only area lined with stores and restaurants in downtown Burlington. People typically wander the street with a companion. When I see two people together who appear as the same gender, I do not automatically think they are in a relationship – that is unless they’re playing tonsil hockey out in the open. But in a state so welcoming to same-sex coupling, it seems as though many people expect two humans of the same appearing gender must be in a relationship.

A few weeks ago, Katie, myself and one of our friends, Liv, went out for dinner on Church Street. Katie and I sat on the same side of the table, ordered the same meal, and split a bottle of wine. At the end of the meal, the waiter asked only Katie and me if we would be needing separate checks. It had already been assumed Liv would not be on the same bill as either of us, but would need her own.

So how do I sum this up? While I think normalizing homosexual couples is fantastic, there is a need to end assuming and stereotyping. The saying, “never assume because it just makes an ass out of u and me,” was created for a reason. Unless someone tells you they have feelings for the same gender, do not make a preconceived notion regarding their sexuality. Katie and I are strong-willed women who happen to be best friends and very open to male companions. With this being said, do not fear to approach us or other women who seem as though they are uninterested in men due to ridiculously, antiquated, taught judgements. I promise you, approximately 9 out of 10 women won’t bite your head off, so the odds are in your favor.