Still salty that Chiv doesn’t accept fiction or poetry? Desperately trying to diversify that portfolio before graduation? Wanna hold a printed copy of your art in your cold, cold hands? Just really like zines?

Then Trash is for you.

You’ve probably seen it around campus—the Riot Grrrl-esque zine with a strong DIY vibe. Since last year it’s popped up periodically, complete with stickers and enough nudity and profanity to make an administrator clutch his pearls.

“We never had a moment where we both sat down and said, ‘Let’s start a zine.’ It just sort of happened. We made some informal versions our freshman year, and then we just started putting in more and more effort… People got so excited about [the first official issue] that we decided to push it to the next level for the following issues,” explained Olivia.

After a few informal practice runs, the first official issue—Love & Hate—dropped February 2017. The Trash Babes released it by scattering copies all around the CCM building in the middle of the night.

Since then, there have been Good & Evil and Light issues. Next up: Fresh.

Trash’s manifesto is “… a celebration of our dirty parts
an opportunity to showcase the artwork that would otherwise not be seen
creations that come not from the paid, but from the emerging
not what is beautiful, but what is true…” 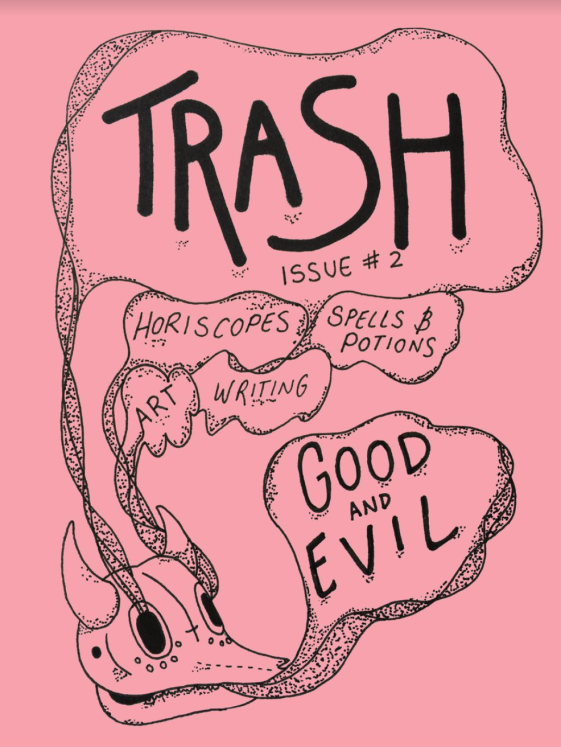 Trash doesn’t require prior experience, an application/cover letter, or even Champlain affiliation. All submissions are welcome and viewed equally. Trash wants photography, poetry, illustrations, collages, stories, jokes, comics, whatever original content you want to throw at them. The only requirement is that it be less than one page long so one piece doesn’t take over the entire zine.

(Tip: Sticking to the theme of the issue and tone/aesthetic of Trash will help your chances of getting accepted. The Trash Babes suggest you take a look at some old issues for inspiration.)

Olivia told Chiv that Trash’s goal is to “provide the chance for up-and-coming artists to publish work that would otherwise not be seen. We want to provide a space for artists and writers to express themselves freely without the pressures and formality that other lit mags require.

“It’s all about giving people a starting place, and showcasing work that we love, regardless of name, age, or experience level.”

The Trash Babes also generate a fair bit of content themselves, playing to their strengths.

Maddie specializes in visual art contributions. “[Trash is] a really exciting way to experiment with design, there are no rules, I am learning as I go, and I think it definitely shows as time goes on.”

Olivia writes poems and regular features such as horoscopes, hot or nots, and quizzes. “Mostly, I just try to keep it casual and colloquial while still remaining different from other pieces of writing you might find on the internet.”

They also do all the breakdown-inducing, unglamorous behind-the-scenes production work single-handedly: soliciting and sorting through submissions, editing and copyediting, marketing and designing, mapping out content, securing an event space, talking to brands, finding the cheapest and easiest place to print, printing and sewing up all the copies, finding a place to distribute them, and then actually distributing them.

Then there are the launch parties. They’re a way for people to hang out and snag a copy of the latest issue, hot off the presses. Maddie and Olivia enjoy taking the opportunity to get to know their contributors in person and meet other artists.

“The most recent launch party, back in November, was amazing,” said Olivia. “We were able to transform a space into pure Trash. The Light issue was for sale, along with a mini art show, and even free condoms, lube, dental dams, etc. for the ladies*.”

“We are expecting [the next launch party] to be even more fun. We will hopefully be able to incorporate live music,” said Maddie.

The deadline for Fresh was February 14 but don’t fret if you missed it. There will be another issue later and you can still go to the launch party! Date, time, and location TBD—stay tuned.

According to Olivia, Trash was started without either gal realizing how successful it would be. “When we started getting more submissions and more attention, we couldn’t believe it. I think part of why it works is because we never look at any of the work we do as a chance to make money. That isn’t and never was the goal. It just feels good to share beautiful artwork with people who care about it.”

“I think we started Trash purely to as a way to express ourselves and create an outlet for others to do the same. We had no big expectations, we just liked the concept of creating a zine. I don’t think either of us could have predicted what a big part of our lives this would become. It’s just been so exciting growing as creatives while also getting to work alongside other creative people in the area,” Maddie added.

You can download past issues of Trash for $1 or get a print issue of the most recent one for $3 here.

Keep an eye on Instagram for the most up-to-date Trash info. You can find out when they’re accepting submissions and the details of the next launch party.

Submit to Trash via email at trash.pictochat@gmail.com, via Instagram at @trash_babes, or via Facebook at TRASH MAG.