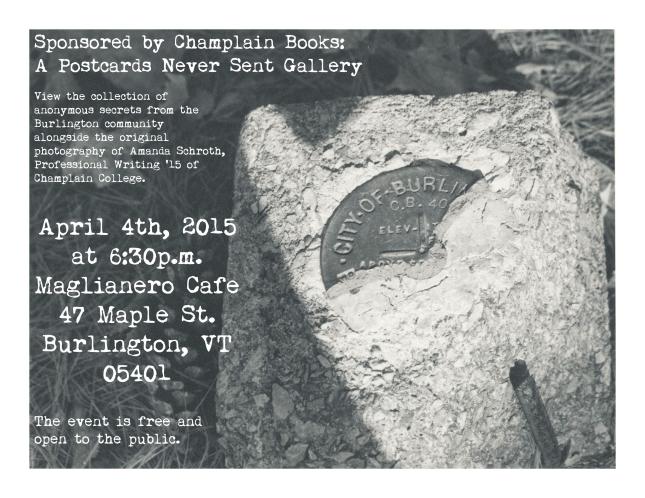 Sitting at a table outside the cafeteria and asking/yelling, “Would you like to submit a secret?” was not the easiest step in my project.

No, Postcards Never Sent was a lot easier when I was behind a computer screen and asking for submissions online. It was even easier when the secrets were just mine and part of a small final project for a photography class. In truth, Postcards could have ended with that class.

Looking back, I’m glad that it didn’t.

Suddenly, I was in the major leagues. I was asking for everyone, anyone, to be a part of something that used to be solely mine.

So as students walked by in search of food or rushed to their next class, I asked every single person, “Would you like to submit a secret?”

Some stopped and turned for a brief second before running off. Others would walk over to the table to see my display: a framed example and a pile of empty submission papers. They started a conversation, asking me about the project.

Then, one by one, they started to submit.

My heart was racing from disbelief. I thought that a face to face confrontation would be off-putting and scare everyone away. I was asking for personal words from complete strangers. Even though they were protected by anonymity, these words were going to be put up on display for an entire community to see.

That day, I reached my submission goal for a total of fifty secrets. I waited until I was home to open up my Beatles lunchbox and look over the secrets. Each message was unique, the emotions ranging from humorous to sad. There were shout outs to nice butts and apologies for eating too much food. There were calls for missing parents and confessions to affairs.

Now these wonderful submissions are the backs of postcards, paired with images that I personally took and printed for each secret, and put up on display to share.

Thank you to those who submitted at the table or online. Without you, this project would have sucked.

To check out the final products and view secrets submitted by the Champlain and Burlington community, Postcards Never Sent will have its first gallery on April 4th, 2015. Sponsored by Champlain Books, the event will be hosted at Maglianero Cafe, 47 Maple St., Burlington, VT from 6:30p.m. to 9:00p.m. The gallery is free and open to the public.