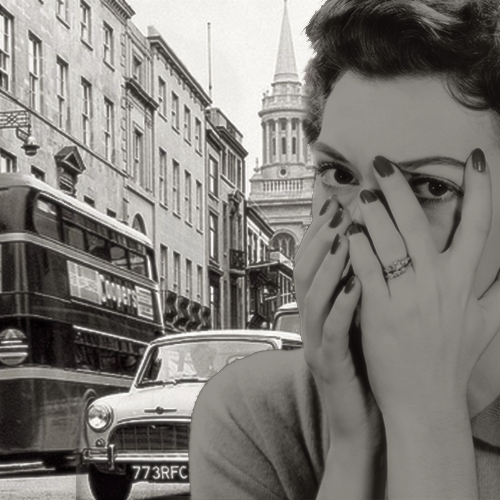 It smelled absolutely putrid. It was as if twelve men had run a marathon through a swamp and put their sneakers in a microwave. And then maybe took a shit inside the sneakers too, just for fun.

It was a hostel located in Greenwich, right by the tram and just above a bar, but it was cheaper than hostels located in London’s city center, so it was home to all sorts of characters. A lot of residents seemed to be men who worked temporary jobs around the city. There was a whole crew of Scottish men, loud and boisterous and drunk at all hours of the day, who made scaffolding. There was a large Russian man, a former pro wrestler with a few too many head injuries, who now worked as a cook, going from city to city—wherever he was sent. One of our roommates, Akenye, was an Irish Nigerian who worked in construction week after week. He’d lived there in London for months, despite the fact that the hostel’s policy was two weeks. When the two weeks would end, Akenye would simply check out and check back in again.

My friend Emma and I were beyond out of place in our hostel room, two young American girls in London, planning touristy days riding the London Eye and staring up at Big Ben. We would pack our bags in the morning with Polaroid cameras and granola bars as the men in our room would lace up their workboots and head off to a long day. After spending the day at the National Gallery and eating fish and chips around Trafalgar Square, returning home was absolutely harrowing and a bit humbling.

“Simon just went to the store to grab more drinks. He’s staying on that bed,” one of the men in our room said. They hadn’t even finished the current six pack they were working through yet. Akenye offered me a beer. I politely declined. I wasn’t interested in sitting around and drinking with them—mostly because I was intimidated, but also because they didn’t smell so great. I drew the curtains around my bed and sat in the darkness, scrolling through Instagram.

A room full of men working hard labor all day long is more than enough to make a room smell like a pigsty. They would fall asleep as soon as they took off their shoes and drift into a cacophony of snores. It was impossible to sleep at night amongst the smell, snorers, and visions of being murdered in a hostel like in a horror movie dancing in my head. I probably nodded off around five in the morning, crying myself to sleep.

But hey, travel is all about new experiences, right?

That’s what my spring break was supposed to be, four countries in one week. One bag, three hostels, one family friend’s house. I met up with my friend who was studying in Prague and we’d planned out a week-long travel adventure. It was our first time doing so much traveling but we were looking forward to seeing London, Edinburgh, Amsterdam, and Paris.

Edinburgh felt much more homey than the bustle of London and walking along the Royal Mile was touristy and urban at the same time. The contrast of the gothic spires against rolling hills painted Scotland into a place out of storybooks, and you understand the amount of nationalism that the Scottish have for their country. Scots love Scotland. There wasn’t a single person I spoke to there that wasn’t supremely proud of their country and there were countless monuments with fresh flowers left to their military, their independence, and their general love for the country. Any tour guide or waitress answered questions with such pride that it was impossible not to get swept up in that same love for the country.

On our first night there, my friend and I signed up for a random pub crawl. Our tour guide was the Scottish version of Jack Black. Yes, he looked like him, but he had a crass sense of humor and spent a lot of the evening making jokes at our expense as well. He was unfazed by every shot he downed at each pub and herded the group of adults from pub to pub along the cobblestone streets of Edinburg. More than one woman took a tumble in her heels and he chuckled to himself every time.

Probably because we signed a waiver that made him no longer liable for any skinned knees.

I expected it to be full of American tourists, frat boys, that sort of thing. But when we arrived, it seemed to be a lot of young Scottish teens. There were two groups out for a friends birthday. There were also a group of Irish students and a young Australian couple. We were the only Americans in the group so, naturally, everyone needed to ask us if we liked Donald Trump.

“No,” I would laugh and shake my head. Every time someone asked, I’d expect them to elaborate or ask a follow up question, but they never did.

We got about six free shots on the pub crawl and a nighttime tour of the streets of Edinburg, but it was the people we met that made it the most interesting. I was nervous at first, but my friend Emma, a marketing major, insisted. “We’ve got to network,” she told me, “I’ll show you how to meet people.” And she periodically went up to group after group, asking where they were from, where they studied, and what brought them to Scotland. I tagged along and slowly became comfortable having conversations of my own. I can’t count the amount of times I said, “Hi! Where are you from?” to people, but every time, I was greeted with smiles and eager conversation. I got advice from Scottish teens about what touristy things I absolutely had to do and talked to Irish students about the differences in their education system and comparing what our universities were like.

When I got home, drunk and exhausted, I felt a growing sense of confidence in me and an eagerness to get to know new strangers and new people in new places. I attributed it to liquid courage, but I felt the same way when I woke up the next morning.