My hands are parallel to the countertop, visibly shaking and unable to reach for the wooden pair of chopsticks underneath them.

I turn my head toward my boyfriend. “I can’t eat this Jack. It’s too much for us. What are we gonna do?”

He’s at a loss for words, mouth agape staring at the two plates holding 50 pieces each of mouth watering sushi. Whispers and unsubtle stares of neighboring customers are directed at Jack and I.

An obvious Dad with a blue polo and cargo shorts hits us with a joke and a chuckle. “You’re gonna need a bigger mouth.”

My polite smile leaves my lips and is replaced with an anxious grimace. Staring at the beautiful monstrosity before me, I plead. “Jack, we have to do something. Can you ask the waiter to take it back?”

Jack manages to flags down a waiter after several attempts, which I now realize was purposeful aversion. “Excuse me?” he says. “There’s been a mistake. We ordered two pieces of 5 rolls. Why do we have so much sushi?”

The waiter quickly replies, “Oh no, you ordered two rolls of each kind. Unfortunately we cannot return it to the kitchen. Everything here is prepared for order so if you return it, we cannot resell the sushi.” He then briskly walks away.

Shell-shocked, both Jack and I stare at the sushi platter for a while longer, hoping for the sweet release of death.

Our cultural ignorance had gotten the best of us. An attempt to step out of our comfort zone in dining choices led to a harsh lesson that sushi and maki differ in quantity of pieces. The hours spent watching Iron Chef America on the Food Network had failed me in my greatest time of need. Jack’s love for the Seven Samurai brought nothing to the table either. Here we sat at a meal designed for at least seven hungry individuals, staring right at the most expensive mistake we had ever made.

Our neighboring table filled with native Vermonters clad in suspenders and bushy beards were still in the stages of ordering their rounds of sake and had yet to purchase any food. The group was inquisitive of the platters of sushi we refused to touch. After explaining our situation, these individuals performed the most Vermont action I have ever witnessed throughout my stay in Burlington.

They wrote Jack and I a haiku to make light out of a financially dark situation:

They also asked to buy a portion of our sushi – pardon me, maki – for $20.  Their encouragements gave Jack and I the peace of mind to try the maki ourselves, and inspired our journey to market the leftovers.

We returned to Champlain College with seven to-go containers of Asian cuisine, $200 less than when we left, and a passion to earn a fraction of our money back from our peers. Jack was the networker; he had connections to multiple first-year halls through high school friends. I was the vendor who peddled the goods in common room areas. We began at McDonald Hall and interrupted a Dungeons and Dragons session to persuade the roleplayers to buy a light refreshment.

“$6 for five pieces! It’s the prime stuff, I promise, we just couldn’t finish it all,” I would declare.

Our methods of selling became more refined with each unique hall experience. In Lyman Hall we squatted by the front door with all maki containers beautifully displayed on the floor, attempting to catch individuals on their way to Late Night dinner. In South House the foot traffic from the entrance was close to none so our our marketing method mimicked one of a salesmen, knocking door to door with an asian cuisine elevator pitch at the ready. I soon collected enough money where I could break $20 bills. My favorite form of currency utilized to purchase the sushi was laundry quarters.

The last three pieces of maki were sold to an RA at 371 Main Street. Jack and I walked back to our own hall listening to the church bell chime twelve. (I shit you not, it was the stroke of midnight). Within three hours we made a total of $120 dollars and sold 60+ pieces of maki.

What started as an anxiety-inducing dinner date became a quintessential college experience, and I learned that college students will waste their laundry money for a good story and eat second-hand food if the price is right. 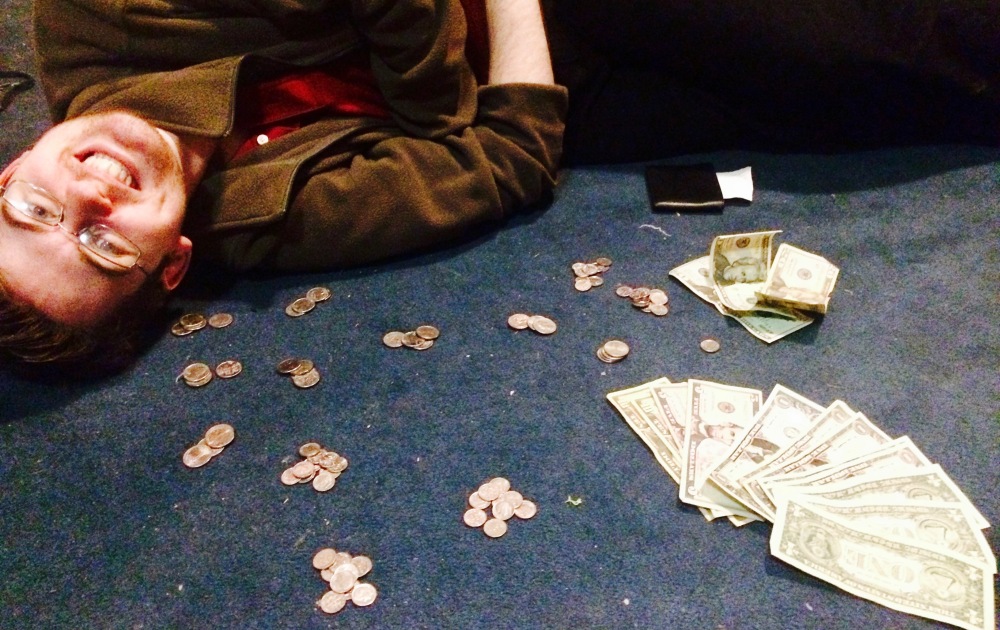