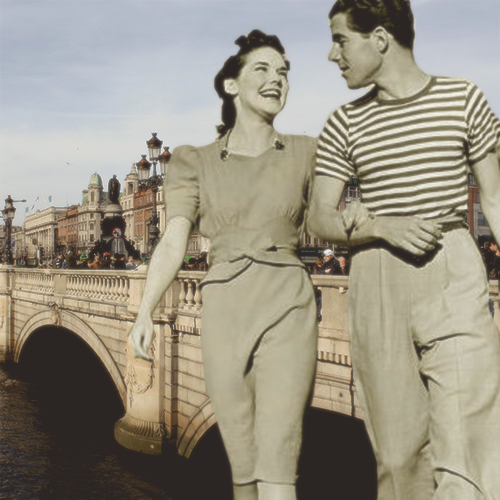 The day started off with my purse strap breaking.

I was three feet from the bus door, which was closed and pulling away, and there it went, crashing to the pavement at my feet. Now, I usually have a sewing kit (because I am that type of person) but when I travel in another continent not all of my usual supplies carry over.

Here I was in Ireland on a school-sponsored trip, trying to prove my independence, and fix my purse. Thankfully I found a safety pin and the world was saved from destruction, but I still needed a new purse, and money.

With the group dispersing, I trundled down the road with the boyfriend in tow, searching for the currency exchange we’d passed a few blocks back. This is where I should have realized the importance of a city map.

After crisscrossing the same intersection twice and taking a rogue left turn, we found the currency exchange and I politely slid the bills under the counter.

The center of the city is identified by the River Liffey and a large sculpture known as “the spire.” I found a purse, marveled at how much nicer everything seemed in Europe, and shouted my praise at the women waving signs to “Repeal the 8th.”

Feeling bad about dragging the boyfriend around for a purse, I told him to pick where to go next. We had five hours free for the day; one was gone thanks to the purse snafu.

I have to say that out of my entire trip, the one thing I missed about the US was street signs. In Dublin, it appeared there were none. So we resorted to finding a hotel concierge, a very nice man who gave us the wrong directions. We did not know that, and off we went.

We eventually emerged in what appeared to be a residential neighborhood with tall multi-family homes, tiny yards, and scruffy-looking fences. This somehow lead us onto a main-ish road. There was a store with cheap food, and the wonder that is Tato chips.

A tip to the future traveler: do not try to pay with Canadian money in Ireland, they will not accept it—as the boyfriend now knows.

With food purchased and optimism intact, off we went in search of a bathroom. There were none anywhere at all. But the bladder needs what it needs. I saw a sign that said “the something trust.” Banks are called trusts sometimes, I thought. We decided they could tell us where a bathroom was.

Walking in the door was like walking into a 1920s mental asylum—white painted metal, absolutely empty, and real fucking eerie. Poking our heads down a hallway, we were startled by a craggy Irishman half-yelling at us that “you can’t bring girls in here” and “what were you thinking” before we could explain ourselves.

Darting to the door and flying into the street, we realized that “the something trust” was in fact a men’s halfway house. How wonderful.

A monstrous mall somehow came into our view, and in desperate hope I sprinted to a map of the mall. We found our bathroom!

Two hours had gone by and the enthusiasm was waning, for the boyfriend anyway. I was lost in Dublin, what more could I have ever asked for? Beautiful architecture, cobbled roads, an antique “district,” and ummmm Europe.

We walked toward the spire, along what we thought was the River Liffey, and past an overwhelmingly crowded bar with people sitting all the way down the sidewalk. The “River Liffey” was actually the Royal Canal, but we didn’t realize that and continued along it for two miles before we did. Still, it was the most beautiful stretch of water. A gas station came into view a few blocks past two miles, where we asked for more directions. This time two kind men making falafel gave us the wrong directions.

After much more meandering and weaving through, let me emphasize, unnamed streets, we found a road which was sort of recognizable. On this street was a large poster advertising the Rolling Stones concert coming to Dublin on May 17th. I would later rip the same ad out of a newspaper in Scotland and shove it in my bag. It is now hanging in my dorm room.

We went up two flights of steep stairs, breaking into a run towards a familiar building, and laughing in pure exhaustion upon reaching Dublin Castle. We then got donuts, and sat on a statue near the spire, realizing that we had been lost for three hours.

I have to thank my purse, for defying its claim of being indestructible, and allowing me to wander all over a city I would have otherwise only grazed.