Remember that guy that you hooked up with last year in a dark basement up against a beer pong table? Yeah, the one that has a warped idea of what six inches actually is and a tongue that could probably make it to China if he treated ground the way he treated your mouth. Well, that guy probably has a 5.0 on Lulu and is the #CantBuildIkeaFurniture kind of dude. The Persephone-sent beauty of Lulu is that it gives you the opportunity to anonymously review #NeverAsksQuestions types or, on the flipside, the #OpensDoors kind of guys. ‘

Lulu is the 2014 version of Mark Zuckerberg’s Hot or Not rating system, but built for chicks. It’s less skeevy and probably doesn’t get looked at in rooms that smell like Axe body spray. Rate your hookups, exes, friends, brothers, grandfathers or the kid in your business class that’s probably #NotTheSharpestKnife but is #TallDarkAndHandsome. My last hookup has a 7.9 and if I’d known that before, I wouldn’t have hooked up with him. Current crush is creeping up on a 9.0, so, hey, these things are accurate in a ~Weird Science~ kind of way.

On a more serious note, some of these Worst Qualities tags can be really good indicators of guys who have creepy behavior towards women. If I see a guy who #CantTakeAHint, I’m walking the other way and a lot of other girls probably will too. Guys like this ride on the line of pervasive, pushy buttheads with weird complexes or dudes who complain about the friendzone a lot and have internal fedoras beating inside their hearts.

What about the good qualities, like, c’mon, guys have good things to offer too!

I know, I know; I do want to know if a guy is the #Trustworthy and #LovesHisFamily type of guy because, like, how great is that? Knowing a guy’s good qualities based on other girls’ ratings brings our subjectivity and personal preferences into play so we know if someone’s good for our own wants. I know girls who would love a guy who’s #CaptainFun and others who really just want a guy to #CuddleAfter. I know girls who hate both of those and want something else. There’s a lot of individuality available to Lulu users in the confines of set tags and questions based on your relationship with the person you’re viewing. 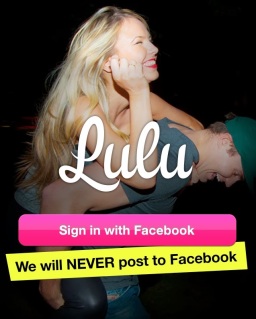 I love Lulu and for all of you dinks out there ready to call me a screaming misandrist who is horrifyingly okay with sexism against dudes, let me set the record straight on an empowering Beyonce song. Women need stuff like this, even if some of it is just calling out #ManChildren or complimenting #RespectsWomen dudes, there’s support and security in things like Lulu. Allowing women to anonymously rate hookups, crushes, exes, and friends gives other women a heads up on what they should expect from a guy.

Being aware of a person’s flaws first is super extra vital to form a real, serious, and trusting relationship because it means that a woman is willing to move past the crappy stuff to find the nice stuff that’s exceptional about a human being. Also, guys can use Lulu and keep tabs on their scores, add more photos of themselves, and add their own tags like #SexualPanther or #SweetToMom.  Personally, I’d love a version of Lulu for guys to rate girls, with some alterations that keep the sexism and slut shaming (look it up) to a minimum, mostly so I could see how many boys think I’m a #GoodKisser or #RagingFeminist.

So, are you ready to girl talk it out on Lulu yet?